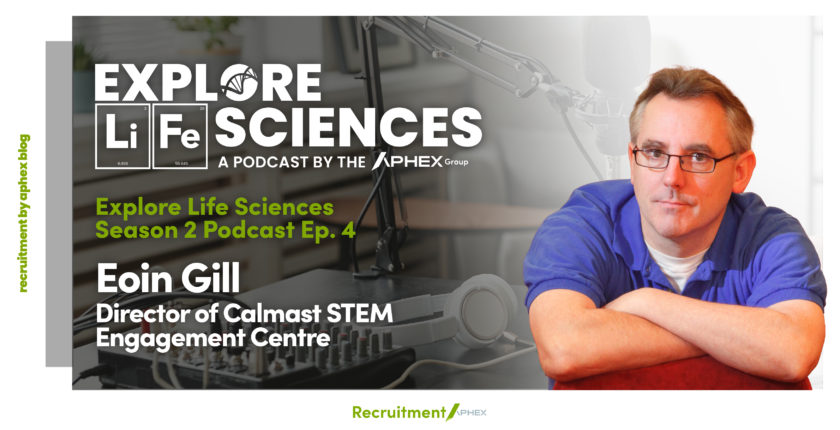 Eoin Gill is a director of Calmast STEM Engagement Centre in Waterford Institute of Technology, coming first to the institute as a lecturer in environmental engineering. He is passionate about promoting STEM for all: in the 20 years since the foundation of Calmast, Eoin has been involved in all areas of STEM promotion and has organised thousands of events reaching hundreds of thousands of people of all ages and backgrounds.

Eoin is particularly proud of Maths Week Ireland – the leading such festival in the world – that attracts annual participation of around 400,000 across the island of Ireland and the Robert Boyle Summer School, founded in 2012, which is Ireland’s first annual gathering for adults exploring science in our culture. Eoin has been prominent in promoting the life and legacy of Waterford born Boyle in Ireland and abroad and has given many presentations on Boyle to highlight Ireland’s scientific heritage including costumed re-enactments of Boyle’s Experiments.

During Eoin’s time with Calmast the centre has won numerous awards including the Descartes Award for Science Communication 2006, awarded by the European Commission and recently the Education Awards 2021 (Ireland) Best Outreach Award and also in 2021, Highly Commended in THE Awards, the first Irish organisation to be so honoured.

What is it about science that you enjoy so much?

I’m an engineer. And while engineering and science overlap quite a bit, they also have different approaches. But I suppose the core formation, a part of the core formation of engineering is science. Because we base our understanding of the natural materials we work with on energy, etc, on science, I suppose. And then when you go forward a lot of research, a lot of engineering research is very much a scientific approach. So you’re more in the scientific world, then? I’ve always been fascinated with the way science can answer questions that we all ask? Well, certainly we asked his children, and men and women have been asking, you know, looking at the night sky, wondering what those bright dots were up there, observing, you know, over centuries or millennia to see that they followed very definite paths in the night sky. And to start understanding that and to start trying to guess, I suppose, what was causing them? So what is light? What is attraction at a distance? When we look at things like magnetism? How can a magnet possibly pull a piece of iron or another magnet are repelling other magnets when there’s obviously no contact between them? So these are the kinds of things that have been questions that have been asked throughout human history. And it fascinated me when I found when they started finding, not the sciences fact, but how do they know this?. And that’s, I suppose, you know, excites me about science.

You are quite knowledgeable on about the father of modern chemistry, Robert Boyle. What can you tell us about him?

We don’t know that much about Boyles personal life. He hasn’t left us that much. But he wrote huge amounts of scientific tracks. So Boyle and my particular interest in him started because he was born in Lismore, County Waterford in 1627. And he was somebody who we know from school science through Boyle’s law, and I used to make reference to this in talks and then I decided this and I better learn a bit more about them. So I started looking into his life, and it’s totally fascinating. He was born in Lismore castle. His father, Richard Boyle, was one of the English settlers in Elizabethan times. He amassed such a fortune that he owned a good bit of monster. And it was said that you could walk from Dungarvan to Killarney and only stray from his lands for a few miles. So that was probably a bit of an exaggeration, but he was reputed the richest man in Ireland and Britain at the time. So Boyle himself was the 14th child, the seventh son, but he still managed to inherit enough money to keep making a very wealthy man. His childhood wasn’t all rosy. His mother died before he was four. He lived in the castle till he was eight with his sister.

He worked in Oxford for a while. And that’s when he did his famous air pump experiments. Is sciences actual. The things he’s, I suppose remembered for are forgotten for is, well, he’s known for Boyle’s law, that’s fairly obvious, but other things like he was the first to use acid base indicators. And so that was, you know, a major step in analytical chemistry. He wrote a book on life, which was is inspired Newton to do his famous experiments at the prison. He wrote books on heat, he wrote books on all sorts of areas.

What else can you tell us about him?

The things he’s, I suppose remembered for are forgotten for is, well, he’s known for Boyle’s law, that’s fairly obvious, but other things like he was the first to use acid base indicators. And so that was, you know, a major step in analytical chemistry. He wrote a book on life, which was is inspired Newton to do his famous experiments at the prison. He wrote books on heat, he wrote books on all sorts of areas. Bush, I suppose it was famous in his day for his experiments with the air pump. So the air pump was invented by a man in Germany in 1657. And Boyle heard about us, he was living in Oxford at the time. And with his assistant, Robert Hooke, they built an air pump. They also built technic glass dome, like big goldfish bowl, and they were able to suck the air out from and put things in and see what the effects were. So things like they put a candle in, the air is withdrawn, the flame goes out. That’s not a surprise. Surprise to us. But he also put in animals, which we wouldn’t do nowadays, of course, on the animals also expired.

What can our listeners expect if they attend the Bealtaine Living Earth Festival?

Well, it’s called the Bealtaine, a living Earth festival because it happens in May and out. And it was the old Celtic celebration of the start of summer. So it was a celebration of life. So we thought that that was a very appropriate name to borrow for the festival. So it’s about celebrating our living Earth. It’s about biodiversity essentially, and, the environment. And it’s trying to show people, you know, we were very, I suppose, removed from the earth in our modern lives, our ancestors or recent ancestors in farming, and that we’re far closer to the earth and cycles of nature and to people in modern life tend to forget that actually, we rely very closely on the earth. This is something we’re running this festival since 2005. It’s something now everyone has heard again, and again, the importance of biodiversity, the importance of looking at nature as a whole, and that we need to preserve all species, because we don’t know what the knock on effect is generally until we lose the species.

Check out the Bealtaine Living Earth Festival by Calmast starting on the 14th – 22nd May this year here https://www.livingearth.ie/